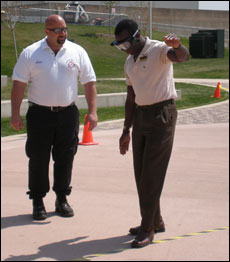 In 1995, Curt Kindschuh (pronounced Kin-Shoe) started Drunk Busters of America. With a college degree in social work, with minors in human relations and business administration, Curt worked in law enforcement for 18 years (9 years full time, 9 years part time), and in 1993 was recognized in the Wisconsin Law Enforcement Officer of the Year Awards for his creative approaches to crime prevention. He was one of the first Drug Abuse Resistance Education (D.A.R.E.) Officers in Wisconsin, and worked for 4 years in 23 schools as a D.A.R.E. Officer. He started the “Shop with a Cop” program in 1990, which has since been duplicated in others areas of the United States, and he was also a bicycle safety officer.

A volunteer with Mothers Against Drunk Driving (MADD) from 1990-2002, he worked full time as the Wisconsin State Executive Director of MADD from 1994-1997. Curt also worked part-time for 4 years working with convicted DUI offenders. Until his commitment to Drunk Busters of America forced him to cut back, he also taught criminal justice classes at a local college. Curt knows and understands impaired driving. He has arrested drunk drivers, investigated fatal crashes, counseled convicted DUI offenders and worked as an advocate for victims of impaired driving crashes.

Curt completed the National Highway Traffic Safety Administration (NHTSA) certified DWI Detection and Standardized Field Sobriety Testing course, Intoxilyzer training, and he was an advanced victim advocate with MADD. He is the designer and patent holder for Drunk Busters Impairment Goggles, used worldwide in the fight to stop impaired driving. Curt was a member of the Driving School Association of the Americas (DSAA), the Wisconsin D.A.R.E. Officers Association, and the National D.A.R.E. Officers Association. He is a member of the International Association for Driver Education, and has established a reputation as a creative, innovative, passionate visionary in impaired driving education. Curt has presented at over seventy conferences and for hundreds of school districts, universities, and other safety organizations. He was a volunteer Big Brother for 15 years, was recognized in 1992 as Big Brother of the Year, and has been recognized for his past volunteer work with the Fond du Lac Jaycees and Optimist club. In February of 2012, he was a featured guest on the American Heroes radio program. In July of 2013, Curt was recognized by the School Safety Advocacy Council and received their prestigious Community Safety Award for his dedication to keeping young people safe. In November of 2013, Curt was recognized by Marian University in Wisconsin at their annual Business and Industry Awards Banquet for his success as an entrepreneur. In January of 2018 he was a guest on the national syndicated radio program hosted by Larry Stevenson, the "Bearded Black Cowboy".

Curt, Shelly, and Patti are available to help you develop the best programs possible to serve your community. Please call 920-583-2491 or email curt@drunkbusters.com with any questions. Drive Smart, Drive Safe, Save a Life.